We've planted 1530 trees this year. 🌲 Together, we're giving back to the planet. Learn More 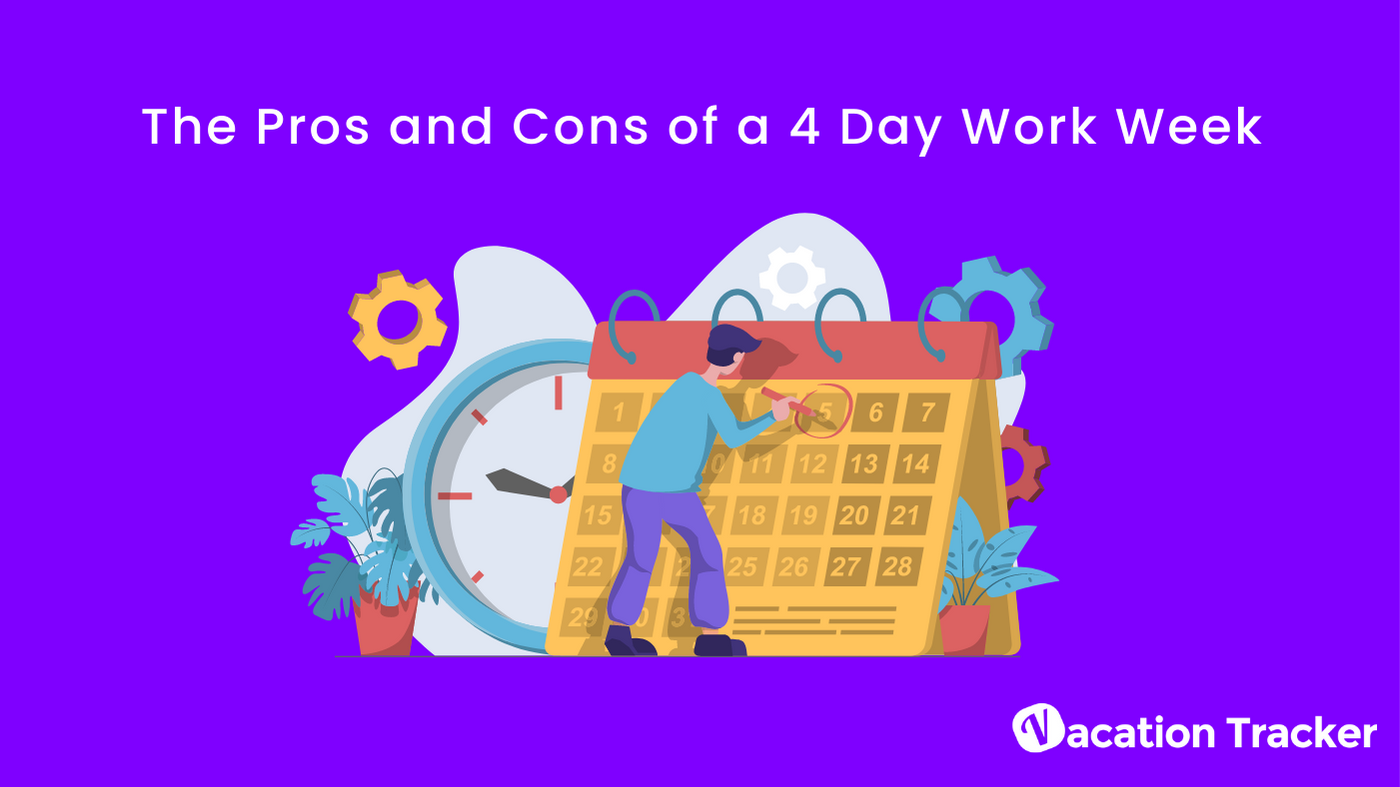 The Pros and Cons of a 4 Day Work Week

An occasional three-day weekend is a cause for excitement for most people, even if they’re workaholics.

So is it possible to take this occasional occurrence and make it a norm? Would it propel employee productivity, or would things take a turn for the worse?

Advocates of the 4 day work week say a regular three-day weekend is key to unlocking a new level of workplace productivity and employee happiness. After all, having three days off every week would give a completely new meaning to TGIF. Imagine three whole days of doing… well, whatever it is you do when you’re not at work.

Think about how many times you’ve heard someone say they’d love to spend more time with their family. Learn to play their favorite instrument. Get back into keeping up with their favorite sports teams. Or even just do nothing at all. There never seemed to be enough hours in the day to do all that — until now.

What exactly is a 4 day work week?

If you’ve been working from an office for the past few decades, you’re probably familiar with the dreaded 40-hour work week. 8am-5pm. 40 hours a week. 5 days a week…. but what if there was a way to change that completely?

Before you decide whether a 4 day work week is built for you or not, it’s important to get the concept right. Depending on how you prefer to work, there are two ways to go about it.

P.S. Here’s the good news: either option results in a 3 day weekend for all. Can we get a W in the chat, please?

The standard compressed work week squeezes 5 days of work into 4.

So if your employees typically work a 40-hour week from Monday to Friday, they would instead work 10 hours per day for only 4 days of the week. This would be then followed by a 3-day weekend from Friday to Sunday.

Having to work fewer days a week while putting in the necessary hours benefits both businesses and employees alike. By the 1920s, the 40-hour work week had become the norm for most American workers. We have been working Monday to Friday ever since. But that is slowly changing — thanks to remote work, compressed schedules, and flexible scheduling demanded by employees (and embraced by businesses.)

In an effort to attract and retain workers, many businesses are also considering making changes to the standard workweek. The result? A 4-day work week (or 32-hour work week) with no change in pay. Hence, most workplaces will reduce the workweek to 32 hours over four days instead of sticking to 40 hours within four days, according to CNBC. 4 Day Week Global calls this a 100-80-100 model where employees receive 100% of their pay for 80% of their time — while maintaining 100% productivity.

Employees are either at the same rate of pay and benefits or less, to reflect the reduced production. So this way, your employees would work around 32 hours over four days and still have a three-day weekend. This may strike you as a radical idea, but we’ve gradually been reducing the number of hours worked within a typical work week since the late 19th century.

In 1890, the United States government estimated that a full-time employee within a manufacturing plant worked an average of 100 hours a week. By the mid-20th century, manufacturing employees only worked 40 hours a week. Thus, the idea of reducing our current work week to 28 hours isn’t nearly as dramatic as many seem to think it is.

Here’s what is happening IRL

Keen to implement the concept of a 4 day work week at your company? You’re not alone.

Although it’s somewhat of a hot topic these days, this shorter work week is not a new concept. The idea of working four days a week has been around for years, and it’s been tried in countries like Sweden and Japan. It’s currently in the biggest pilot stage we’ve ever seen in the UK.

The pilot involves 3,300 workers from 70 companies ranging from financial services providers to even fish-and-chip restaurants. During the program, workers will receive 100% of their pay for working only 80% of their usual week. All this is in exchange for promising to maintain their usual levels of productivity.

In the US, we’ve seen this happen before. In fact, we’ve seen several companies adopt the four-day workweek model at some point in their history—including Netflix and Best Buy.

What the evidence says

Before the UK, Iceland had conducted the largest trial of a shorter working week, with 2,500 public sector workers participating in two large trials between 2015 and 2019. Here’s a spoiler: participants in these trials showed no corresponding drop in productivity and a dramatic rise in employee well-being.

With that being said, let’s jump into some of the biggest advantages associated with this working model.

Many workers are reacting favorably to the shift – whether it gives them more time to spend with family or just some good old ‘me’ time. The rarity of these programs motivates employees to work harder to earn (and retain) this uncommon benefit.

Therefore, considering moving to a 4-day workweek with either compressed or reduced hours, can be a strong motivator for employees to join your company. Just like any other employee benefit, it’s perceived as a way your business cares for its staff — both on and off the job.

You’d think a 20% reduction in work time would reflect 20% less productivity in your workforce. However, it seems to be the complete opposite.

The results from this study are not surprising, considering some of the world’s most productive countries, like Norway, Denmark, Germany, and the Netherlands, work, on average, around 27 hours a week — the same amount of time proposed for a four-day work week in the UK.

On the other hand, Japan, a country known for its overworked employees, ranks 20th out of 35 countries in terms of productivity. These numbers really do speak for themselves, don’t they?

The same poll found business leaders reporting 62% reported fewer sick days being used. Stress among employees also decreased, falling from 45% to 38%. When employees have that extra day off during traditional business hours, they’re better able to schedule personal necessities. They can make doctor’s and other personal appointments on their regular day off, without taking time away from their jobs. Hit the gym, or even just sleep in and have a lazy day instead.

The options are endless and the decision is all theirs to make.

The key to efficient employee retention lies in giving people some wiggle room. If you’re going to make them work the same amount of hours, you may as well let them pick their own schedule.

Thus, avoiding burnout and promoting employee wellness are essential. And a 4 day work week helps you do exactly that.

Surprise, surprise: a 2020 Gallup poll of over 10,000 workers found that employees who worked a 4-day week had the lowest level of job burnout. Additionally, the same employees also reported the highest rates of ‘thriving wellbeing’ at a staggering 63% of those polled. Who doesn’t love thriving?

If you want to lower your company’s carbon footprint, keeping employees off the road and keeping the lights off (even 20% of the time) can play a big role. In addition to reducing energy use for employees commuting to the workplace, keeping them off the road reduces emissions into the atmosphere.

In 2019, a study conducted by Microsoft Japan found that moving to a four-day workweek increased productivity by 40%. Furthermore, they saved more than 20% on electricity costs over the previous year. They also reduced the number of pages printed by almost 60%. Sounds like a win-win situation to us!

Even with all its given benefits, many believe that a 4 day work week will cause more problems than it would solve. But before you say yes, or even pilot a program, take a look at some of the ways you’ll need to consider an offset to provide the benefit.

A 4 day work week isn’t always a good idea for every company out there. Why? Because some businesses operate according to a 24/7 schedule (like hospitals) or have customers who need them at specific times during the day or week (like retail stores).

Here’s an easy fix: for some organizations, half of the 4-day workforce takes off on Mondays, while the other half takes off on Friday – providing usual coverage for clients. However, the need to have your team available for customers, or to assist other members of the group, may limit your ability to compress the workweek. It might also lead to employee scheduling conflicts.

What’s the upside to a 4-day work week, you ask? More time for sleep, family, and friends. But the drawbacks? You might have to schedule that meeting at 6 pm on Thursday instead of noon on Monday.

In addition to managing client needs, internal scheduling is also a cause for concern. Planned meetings can be scheduled within the workweek, but impromptu or emergency meetings may be troublesome to map out. How often these occur within your organization will ultimately dictate the feasibility of a 4-day workweek.

A 4 day work week is a great way to get more done in the same amount of time. That is, only if your employees actually know how to manage their time.

There may be sections of your company that can shift to a 4-day workweek, while others cannot. Unless you plan to shut down your production line and live with the ripple effects it can cause, office workers may have the option of a 4 day work week but not front-liners. This might end up causing unwanted internal conflict. 4 day work weeks are only a magical concept for a few workers, not all. This can be a pain point for your business — employees will undoubtedly resent having longer days.

So if you’re considering a change, make sure it can apply equally to all departments. It’s a bitter pill to swallow, but this concept is not a one size fits all type solution. Hence, it will be essential to review all the plusses and minuses of making the shift before deciding to change.

All things considered, if you think a 4 day work week could be good for your business, there is no harm in trying it out.

However, if you are currently working the standard 40-hour week, you can do the experiment on a small scale by taking one of your days off or reducing your hours on one day. This will give you some valuable insights into what employees think and how that would affect productivity. If everyone has positive feedback, then maybe it’s time to try switching to a 4 day work week full time! 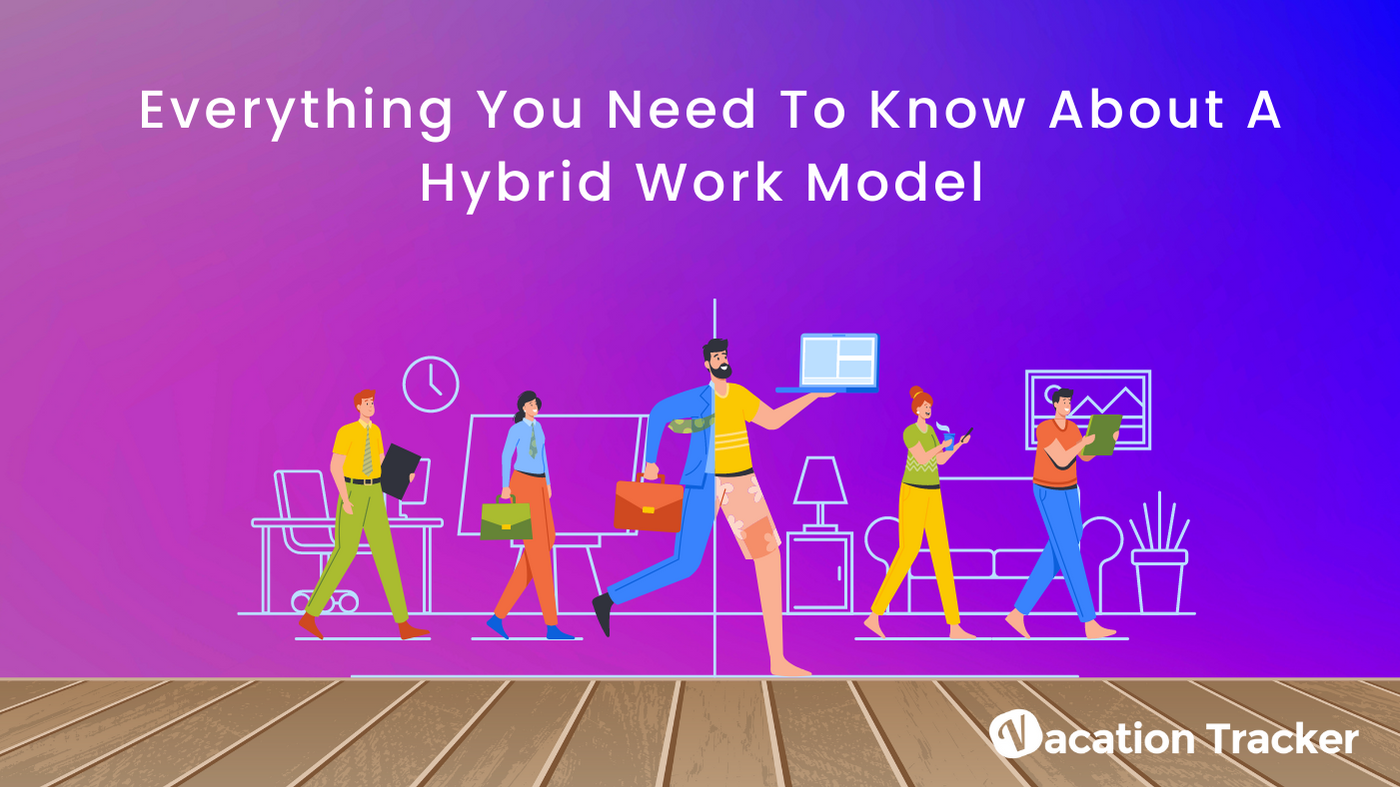 Everything You Need To Know About A Hybrid Work Model 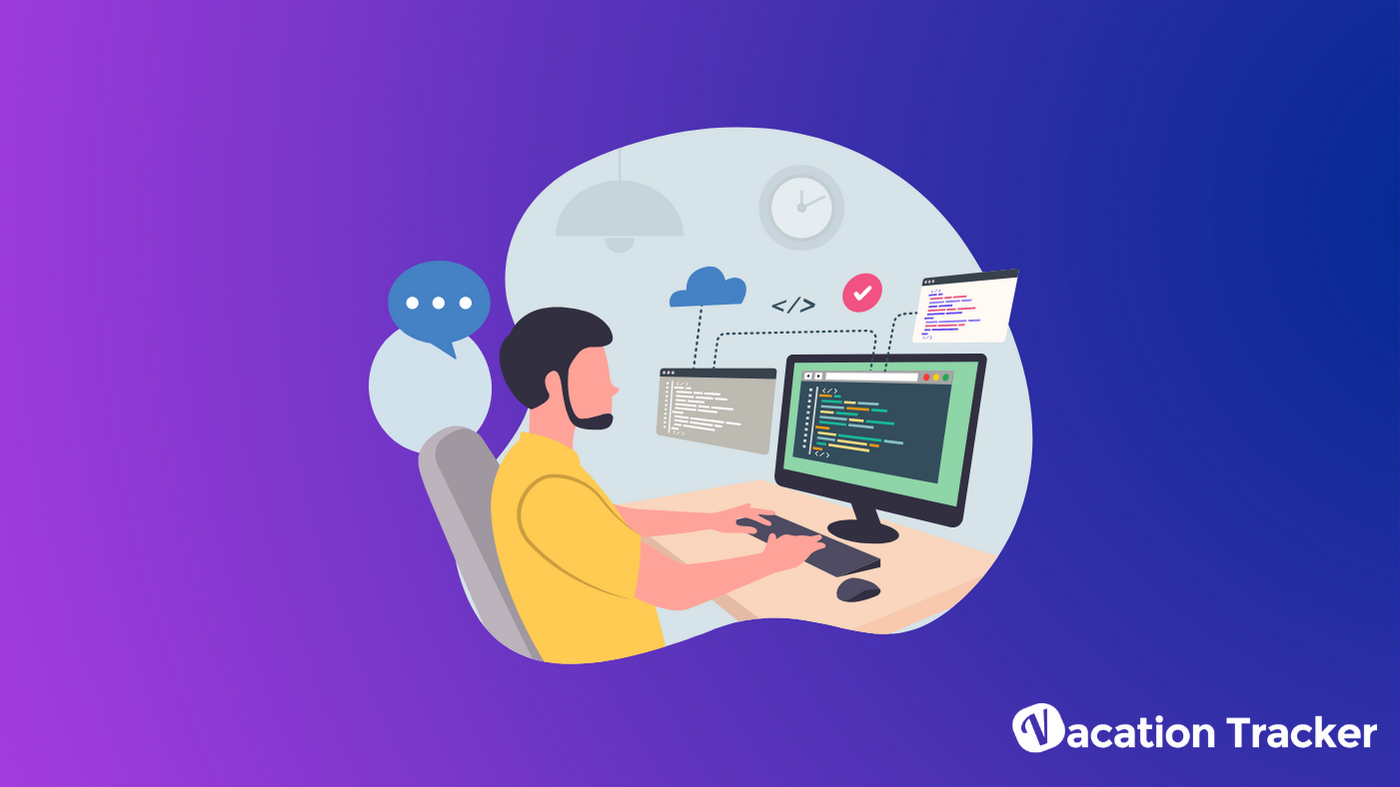 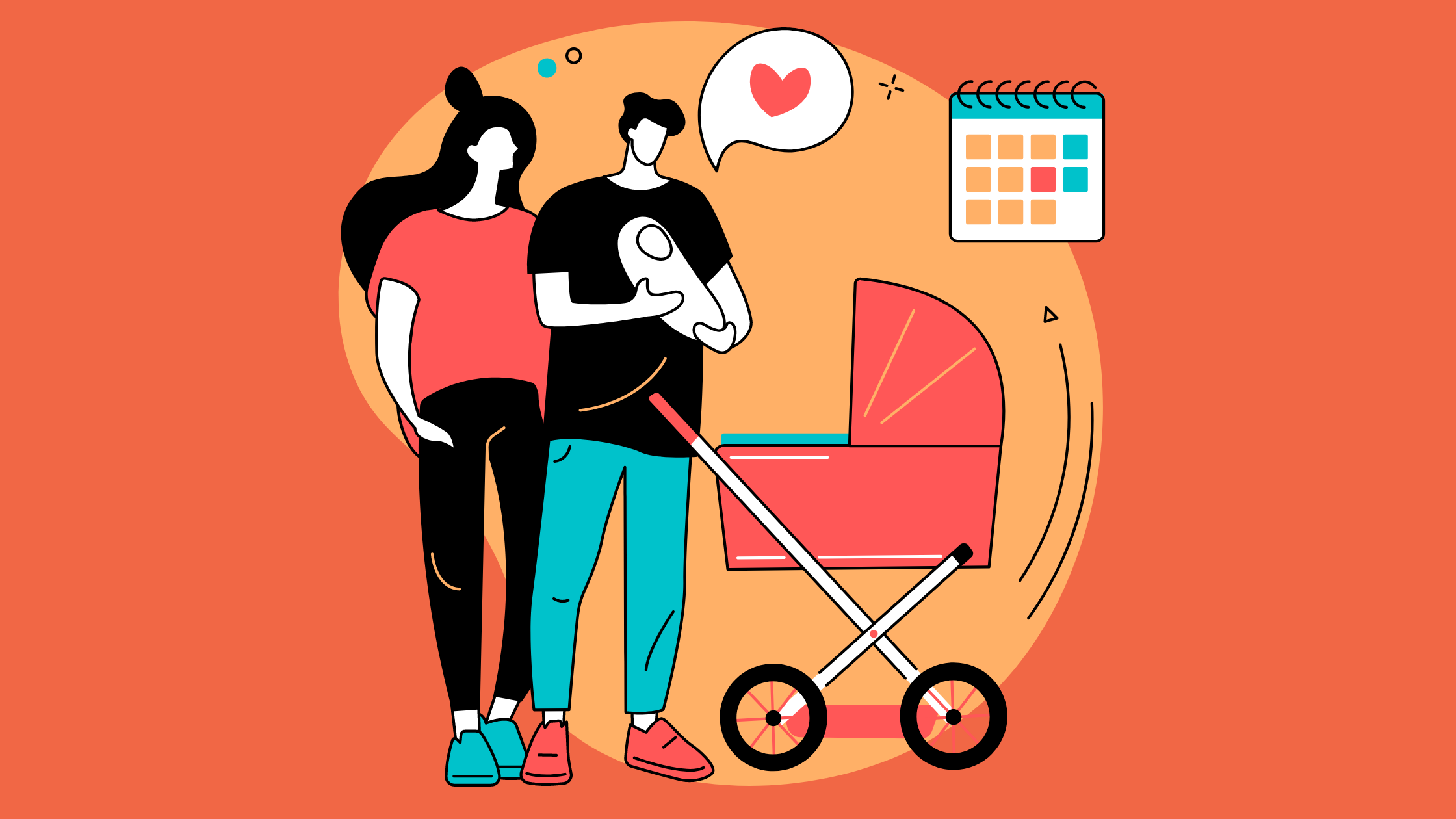 How to Plan Your Parental Leave