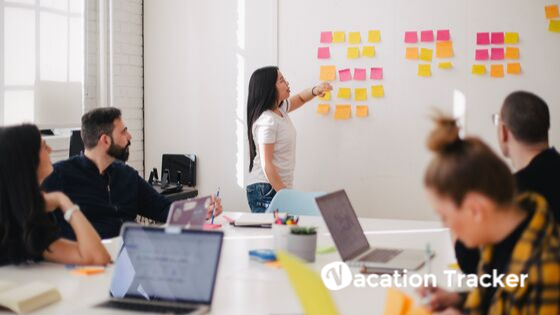 Without a doubt, all first days at work look the same. You’re meeting new people, everything seems weird and for some time you’ll have an “out of the body experience”. You’re on your best behavior and so are the people from your team. However, this doesn’t last forever. Soon enough, everyone starts going out of their cocoon establishing themselves as a part of the team. Finally, after some time you’re so used to each other, you’re able to work perfectly.

Later, he added a fifth phase Adjourning, but we will get to it. This division of stages helps managers process and acknowledge conflicts within a team, speed up processes and increase the team’s performance. Now, let’s see in detail what are the stages of Tuckman’s model of group development.

The first phase of Tuckman’s model of group development: Forming

The first phase of Tuckman’s model of group development refers to a period when everyone meets each other and gets familiar with the project. This phase often lasts several weeks and during this phase, we are getting to know our coworkers, their straights, and weaknesses. During this stage, people usually avoid conflict and everyone plays nice. The main task for a team during the forming phase is to learn about the project, objectives, and goals and share the responsibilities whiten the team. Many people find this stage frustrating because the majority of their time is dedicated to data collection and organization. This is why managers have a crucial role during this phase, assigning tasks and roles and determining when and how they will complete them.

The second phase of Tuckman’s model of group development: Storming

In this phase, people within the team feel much safer being with each other. And this is when conflicts may arise. They’re happening mainly due to different personalities and working styles. Consequently, a team’s productivity starts to fall. During this stage, the team has to determine how it’s going to resolve conflicts and move forward. This is when team members start listening to each other and establishing their routines. During the storming phase, managers have to establish their authority and track and delegate tasks.

The third phase of Tuckman’s model of group development: Norming

Norming is the stage where everything comes together. Everyone from the team knows their tasks and timelines as well as how each member contributes to the project. Additionally, during this stage team members start appreciating each other and the skills every one of them brings to the team. This is when real team spirit begins because during this stage team members start helping and asking for help. Managers should be cautious about introducing new ideas because they can destabilize the already-tuned team.

The fourth phase of Tuckman’s model of group development: Performing

In this phase everything runs perfectly: the team is stable and the goals are clear. Team processes are perfectioned and the job is done faster and teams require minimal supervision. There are no more conflicts and every opinion matters. During this stage, managers should acknowledge efforts and celebrate achievements to boost morale and engagement.

An additional phase of Tuckman’s model of group development: Adjourning

This phase was added much later and it’s also known as the mourning stage. During this phase, the project is coming to an end and teams fall apart. This is why some of the team members can become sad and mourn the end of an era.

Understanding how team functions are important…

… and understanding each team member’s needs is essential too. Just like every team member should work equally towards the same goal, they should rest as well. This is when Vacation Tracker comes into the story offering a unique leave-tracking experience. This simple tool will enable equal leave distribution to each team member, helping prevent burnout. It doesn’t cost to try it, you just need to sign up for a first 7-days trial period.